Towards the end of the 19th century, the first Jews settled in De Pijp, one of Amsterdam's newer neighborhoods at that time. In 1877 these Jews formed the society "Hulpe Israëls" (Israel's Help); in 1892 the society built its own synagogue at Gerard Dou street 238.

Until World War II the synagogue at Gerard Dou street flourished. It was known as a place where intellectuals and rabbis prayed together with laborers. Daily services were well-attended, and the synagogue maintained an active program of study for its members.

Until just before Rosh Hashana (the Jewish New Year) 1943, the synagogue held daily services during World War II. Nestled between two row-houses on the narrow Gerard Dou street, the synagogue remained unnoticed by the Germans. Due to the watchful eyes of its neighbors, the building survived the war. On the eve of Shavuot, May 18, 1945, the first service after World War II at the Gerard Dou synagogue was held. At that time it was the only Ashkenazi synagogue in Amsterdam which could be used. 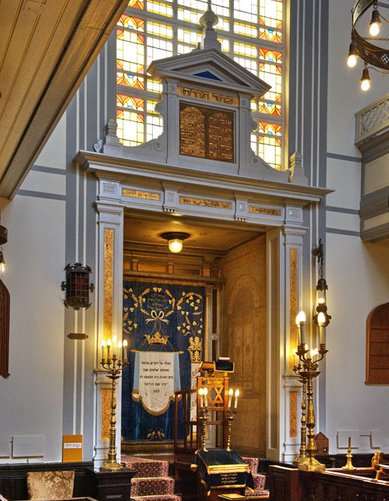 Nowadays the Gerard Dou synagogue, the oldest functioning Ashkenazi synagogue in Amsterdam, holds a special place in Amsterdam's Jewish Orthodox community. Regular services are held on Shabbat and holidays, and the shul has its own rabbi and cantor.

The traditional Dutch-Jewish melodies and rituals, the beautiful interior and the gezellige (cozy) atmosphere make services at the Gerard Dou shul exceptional. Visitors of all backgrounds come from great distances because they feel so at home at Gerard Dou. First-time visitors are always warmly welcomed, and this special friendliness has attracted young people to the shul. The membership of the synagogue is small, so each individual is important to the shul.

In 2013 the Jewish Congregation Amsterdam (NIHS) became a federation of shuls, called NIHS 2.0. Members could tick a shuffle of their choice and thus became a member of that shuffle community. There were already 5 shuls owned by the NIHS. Other non-bound shuls, including the Gerard Dousjoel, owned by the association Hulpe Israëls, were asked to become a member of the federation. During the general members meeting of the association Hulpe Israëls, joining NIHS 2.0 was accepted with 11 votes for, 2 abstentions and 0 against. Since then we have had two legal forms: an independent association and a shuffleboard as an independent part of the NIHS. In practice, the two boards consist of almost the same persons and work with one cash register.

By the way, it was not the first time we joined the NIHS. After May 5, 1945 the Gerard Doushul became the central shul of the Jewish Congregation. The congregation shul was either destroyed or not yet furnished for a service, for example, because the wood of the banks was used by others during the winter of hunger. In 1968 the NIHS put an end to the relationship, because the shul had few visitors, especially compared to the shuls in the Lekstraat and at the Jacob Obrechtplein in Amsterdam South.

The cooperation with the NIHS is very good. For example, our secretary is a member of the Supervisory Board of the NIHS and in 2020 we participated in the zoom sessions during the corona time. And of course, we are happy with the financial support.

After the morning services there is a kiddush.

On Yom Kippur, Purim and Tisha B'Av there always is an evening service. Those services start at the beginning time of the festival.

Normally we do not have evening services on Shabbat and other festivals however,

From January 2023 we also temporary have services every fridaynight,  Nusach Chabad/Israeli style. Services start at entrance of Shabbat.

In our Synagogue there are also chuppot (marriages) and bar- and bat-mitswah ceremonies. Please send us an email for more information.